This Saturday, July 14, is going to be a treat for all of us!  Kevin Horner from Kansas City, MO, will be entertaining us through impressions, comedy and ventriloquism.  He receives high praise after his shows with people sending reviews such as "we laughed for a full hour", "our sides hurt from laughing so much," "Kevin Horner is a fantastic ventriloquist/Illusionist; hilarious and fun entertainment!!!
Don't miss this fun evening of humor the whole family can enjoy. 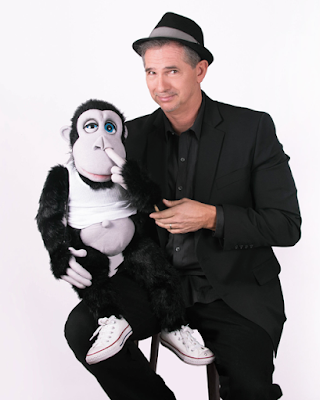 Here is an excerpt from his website:
Kevin Horner is a veteran comedian, ventriloquist, and magician. His unique style, voices, and adaptability spans all ages and personalities. His timing, energy, and quick wit and reactions with all audiences is guaranteed to inspire uproarious laughter.
Kevin’s path started when he was approached to do bullying prevention programs in schools across the Midwest. The program entitled “Speaking Up For Those Who Can’t Speak Up For Themselves” was presented for over 15 years across the United States.
Kevin’s passion and ability to touch the hearts of audiences while making them laugh took him on the road to becoming a full time performer. Kevin has performed for Comicon, the Improv, Great Wolf Lodge, Whiteman Air Force Base, Fort Riley Military Base, Arkansas Tech University, as well as many other Corporate events, Schools, Libraries, Fairs and Festivals.
Kevin won the People’s Choice Awards at the One Way Street Puppet Festival in 2003, 2004, and 2005.Kevin was awarded Best Ventriloquist by Gig Masters in 2014, 2015, 2016, and 2017.