Jake Hoult and the Casey UMC Praise Band will be leading us in praise at the Linn Park Amphitheater this Saturday, October 9, at 7:00 p.m.  We have been looking forward to this event since July when it had to be cancelled because of rain.  The weather forecast appears to be perfect for Saturday so come enjoy an evening of worship under the stars.  Bring lawn chairs.

There will be no concessions at this event.

They have performed in Las Vegas, opened for comedian Yakov Smirnoff at the Effingham Performance Center, Three Dog night at the Corvette Fun Fest, and Asleep at the Wheel in Herrin, IL. They have entertained VIP's at the President Casino in St. Louis, the Sears Tower, Eastern Illinois University, and the troops at Camp Atterbury in Indiana.

Blue Suede Crew's repertoire includes a tribute to the birth of Rock and Roll, highlighting such artists as Bill Haley, Danny and the Juniors, Del Shannon and other early legends.  They take the audience back to the 60's era with music from the Beatles, Roy Orbison, Tom Jones, the Beach Boys, and Elton John.  And, of course, there will be songs from the one and only "King of Rock and Roll"... Elvis Presley.  Songs from Blue Suede Crew's Gospel Show will also be included.

This popular group puts on an amazing Vegas' style show that people will be talking about for days to come.  Don't miss it!  Bring lawn chairs and come enjoy an evening of great music.

Food will be available for purchase beginning at 6:00 p.m. from Sadie's Restaurant and Linn Park Concessions.
1 comment:

Generation Gap to Perform at Linn Park This Saturday, August 28.

Generation Gap, a local band from Casey, will be performing this Saturday, August 28, Linn Park at 7:00 p.m.  The band plays a variety of Country styles, including new country, classic country, 50's, 60's, 70's rock, and bluegrass.  Band members include Richard Hippler and his two grandsons Cody and Derick. They will be doing cover songs of Charley Daniels, Billy Currington, George Strait, Lynyrd Skynyrd, Alan Jackson, and many others.

Bring your lawn chairs and enjoy a fun evening of foot stomping music.  Linn Park Concessions will be open for this event but Sadie's will be unavailable.

Creole Stomp has captured the ears and the feet of Louisiana music fans across North America. Led by French-speaking Creole fiddler and accordionist Dennis Stroughmatt, Creole Stomp keeps listeners enthralled and dancers moving on the floor with a rollicking mix of contemporary blues, swamp pop, and traditional Cajun and zydeco dance tunes.

A favorite on the Cajun-zydeco dance circuit, the band has also become a celebrated fixture at venues around the United States, ranging from park concerts and theaters to folk and blues festivals. No matter the venue, wherever they come from, and wherever they go, Creole Stomp is a band that knows how to throw a Louisiana party!

What grew out of his Louisiana bayou experience, in 2002 Dennis Stroughmatt along with Robert Russell, created the foundation of what has become the premiere Cajun-Zydeco band in the midwest.

Be sure to mark your calendars!

Jake Hoult & the Casey UMC Praise Team will be leading a night of praise at the Amphitheater on Saturday, October 9, 7:00 p.m.

This Saturday's Gathering (August 7) at Linn Park will feature Battle Creek, one of central Illinois most popular bands, performing primarily classic country hits, but they will also be playing many of your favorites from other genres’ as well. Battle Creek has been entertaining folks in Central Illinois since 1985. Their “Family-Friendly” performances contain elements of a Branson Theater, The Grand Ole Opry and a Texas Dance Hall. They connect with audiences of all ages. Each show is filled with down-home humor, fun and lots of great music! Band members Wes Wheeler, Steve Reynolds and Bill Moore have been blessed with tremendous talent and they enjoy sharing those talents with their audiences through their energized performances.
Bring your lawn chair and enjoy a great evening!
Food from Linn Park Concessions and Sadie’s Restaurant will be available for sale at 6 p.m. Battle Creek will take the stage at 7 p.m.
*Please note: Next week's event with Sisters & Co. has been cancelled due to scheduling difficulties.
1 comment: 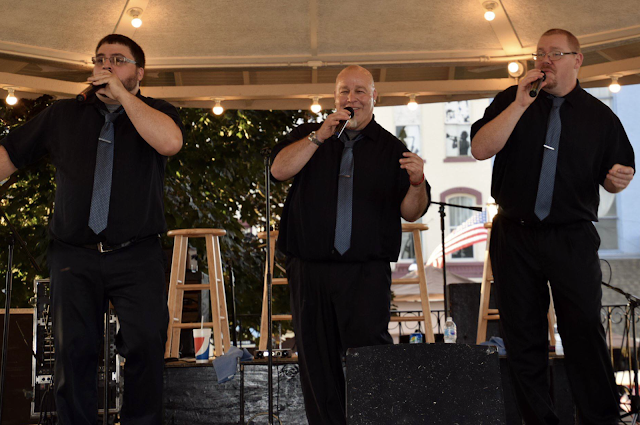 You won’t want to miss this free concert.  It will be a fun evening of foot tapping, hand clapping, dancing music.

Food will be for sale from Linn Park Concessions and Sadie’s Restaurant beginning at 6:00.  Bring your lawn chairs.  The entire area is shaded by 7:00 so it is always pleasant to enjoy music under the stars.

Stones Crossing will be at Linn Park Amphitheater this Saturday, July 17, 7:00 p.m.
This new group comes from Martinsville Indiana.  It is comprised of Mark Graham (who sang at Linn Park a couple of years ago with Cornfields & Crossroads) and his two daughters and a son-in-law.  Mark has been singing with his daughters, Shalynn and Amanda their whole lives in church and at home.  After 30 years of singing bluegrass with various bands Mark finally got the chance to perform with his daughters and Shalynns' husband Bill, they decided to make it a permanent thing and that is how Stones Crossing was started. They play a variety of music from Gospel, Country, Bluegrass and some light Rock, Mark says it's the most fun he has ever had playing music, he believes God has truly blessed him.
There will be no Linn Park Concessions for this concert, but Sadie’s will have food & drinks for purchase beginning at 6:00.

*And mark your calendars for July 24, when John Crouch will be playing at the Amphitheater.

Due to the rain now coming down and the forecast for at least an inch this evening we must cancel tonight's event.  So disappointing!  Hopefully, we can find a date to reschedule because we were really looking forward to a night of worship with Jake Hoult and the Casey UMC Praise Band.

Elevate Praise! This Saturday, July 10, 7:00 p.m. Jake Hoult and the Casey UMC Praise Band at Linn Park Amphitheater!
Bring your lawn chairs and enjoy this great opportunity to worship the Lord God Almighty with like-minded believers from our community!
Food from Sadies and Linn Park Concessions available for purchase beginning at 6:00.
No comments: